Do You Ever Get That Feeling?

I get this feeling all the time: something’s not right.  It’s got to be better.  What am I missing?  Maybe it’s a personality flaw.  I’m never satisfied, or if I‘m presented with something, anything, I’m always skeptical until I’m presented first with facts, nothing but the facts.  But facts aren’t enough.  Most of the time, they require interpretation.  Sadly, I’m then in the uncomfortable position of having to question my judgment.  Failure and disappointment is a great educator for it teaches those who are open, to see, to look for answers or fulfillment in hidden places.  That’s one of the reasons I gravitated toward R&D; I wanted to look at the apparently mundane and see something new, something profound.

I was preparing HIPERTECH #6, thinking of a new way, a more accurate idea of rating triggers.  In Bulletin #5, I presented HIPERFIRE’s measurements of hammer strike power against the SAAMI standard (review that white paper for the details).  That presentation began with facts and led us to where we are right now.  Data and facts must mean something!  This was an exploration for certainty, for clarification, even confirmation that our trigger design bias was valid.  After all, the question, what metric best describes what we can all agree (or most of us) is a good trigger, even the best trigger beyond mere personal preference.  When you think about it, common sense or prejudice is a type of group or herd preference.  It can defy the rational.  It can appear to be more qualitative and less quantitative.  Because I’m a trained engineer, I was looking to find in the numbers, in the quantitative, facts that would support the qualitative “feel” of a good trigger, even the best trigger.  The bottom line: if a majority of people experience and agree about the same “good” of something, e.g. trigger feel, then that experience defines what we think is “good” or pleasing, satisfying.  It’s what ergonomics is all about, “the study of people’s efficiency in their working environment.” We apply it here to people’s interaction with their AR15/10 trigger.

So, turn with me to the data presented in the figures of HIPERTECH #5, where we gave the SAAMI copper crusher results of our testing of many triggers.  Let’s replot the copper crusher data for MIL-spec, HIPERTOUCH, and single-stage drop-in triggers.  In the chart below, we plot copper crusher firing pin dimple depth as it deviates from the SAAMI minimum, .017 inches that has been adjusted to .018 inches. .018 is more conservative because we know of some triggers that still light strike even though they meet the SAAMI .017 inch indent depth criteria.  Simple.  Now we have a number that we can use going forward to finding our trigger performance metric that is more meaningful than just trigger weight. 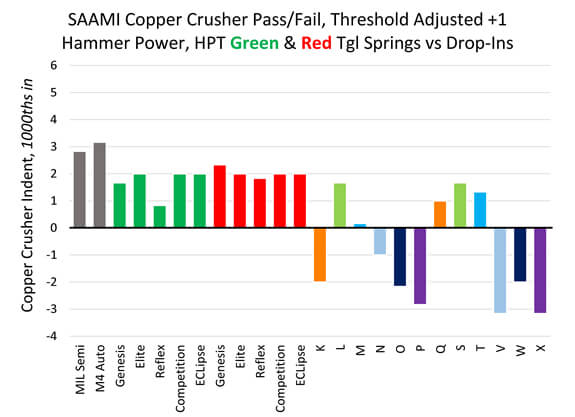 The Bottom Line, Or Rather The Zero Line

Is This Information Important?

As much as a feeling of doubt can stimulate us to search for truth, it’s ultimately a precondition for verifying that what we end up with is where our search should lead.  Finding that pot of gold at the end of the rainbow is a different feeling altogether.  In the context of this white paper series, we’re talking about how the trigger performs, how it feels to us.  Ergonomically speaking, how efficient we are at getting the shot off quickly and accurately.  Read high performance tech white paper #6 when it appears to get closer to that pot of trigger gold.