Everyone Wants a Good Aftermarket Trigger

If you believe the advertising, everyone sells the best aftermarket trigger.  Most of these ARE good, compared to the AR15 shooters’ bane, that MIL-spec one.  But what’s good or not so good, breaks down when making comparisons within the aftermarket group.  Well, here’s an introduction to some info that begins to clarify what makes a good AR trigger.

Seventeen years ago, I wanted to buy a 50 BMG semi-auto rifle because it was cool and ammo was cheap.  But what I saw available in the market place didn’t satisfy my desire for the ultimate in long-range accuracy.  The only rifle option open to me was the one being procured by US MIL units and used in the sandbox after 911.  It was sold and purchased as an anti-material weapon, not anti-personal, because of its accuracy limitations.  Since I have an engineering background, I decided to design my own, more accurate 50.

My first challenge was the trigger.  I knew I had to touch off a large caliber primer.  And I needed very deft control of the trigger to send that round out to distances of 1,000 yards or more and hit my aim. The maximum effective range of the 12.7×99 NATO cartridge is 1,800 yards or one mile.

Well, four patents later I had my 50, I was broke, and I needed startup money.  So, I presented what I had to some equity investors.  They were not interested in the 50 (bummer!), only the trigger in the 50.  They asked whether it could be adapted to work in the AR15.  Fortunately, I said yes, and HIPERFIRE, the company, was born making triggers.  It started with one, and now it’s 10. (Ahem! More are on the way.) 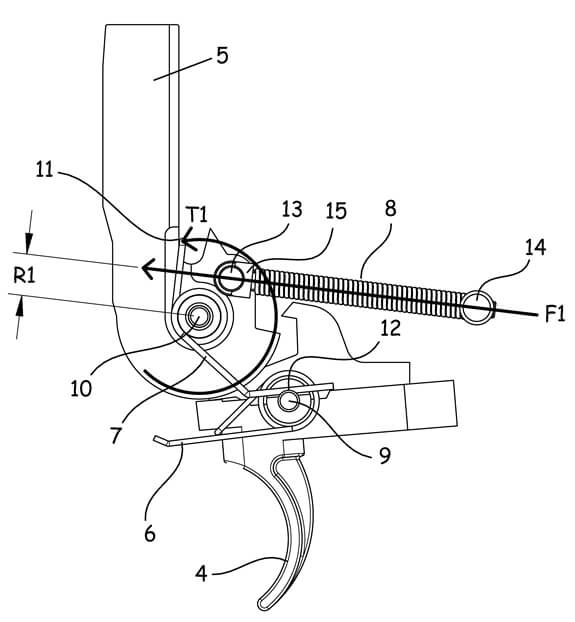 Figure of the 50 BMG trigger from one patent application.

That 50 trigger solved every shortcoming of any trigger I could get my finger on.  When installed in the AR, it was no less surprising.  Control, finesse, pleasure, speed, precision, are just a few of the adjectives that could describe the experience of shooting again.  Remember that first date with that special someone.  Shooting was that first date experienced over and over again.

OK, enough of the back story!  Why am I writing this?  My company, HIPERFIRE, has solved some problems, probably all of the issues with triggers in general, and some other particular ones.  Because of this, if you use our triggers, it will transform your experience, make you a better, faster, more accurate shooter (everything else being equal).  How can I say that?  For one, I’m a better shooter.  The 3-gunners who have adopted our triggers swear by them.  Before the trigger, ½ MOA. After the trigger, ¼ MOA, for example.

Third OK!  If you’re counting.  That’s a good question.  What we need are meaningful metrics, ways to measure and compare one trigger to another, and what those metrics mean when it comes to shot control, finesse, pleasure, speed, and precision.

To that end, HIPERFIRE will begin introducing its HIPERTECH articles on October 1, 2019.

Why is this important?

HIPERFIRE has the knowledge and wants to share it.  This county has been good to me, to us.  American innovation is still possible, HIPERFIRE has proven that.  By raising the bar, we want to encourage others to do the same.  If there are better triggers or better anything, lets’ find it.

After you’ve dived into HIPERTECH, what questions burn within you?  Let me know in the comments section.  For me, there’s no beginning but with an excellent question or observation.