Are you as confused as I am?

How many times have you pulled out that electronic leash in your pocket to search for a specific answer, only to find 10,000 opinions from varying levels of self proclaimed “experts”? We all know what they say,……. “Opinions are like a’holes”. It’s simply madness out there as to how many people have their own take and opinions, and they all think they are infallible.

Seriously, just do a web search on “single-stage vs two-stage triggers” and the opinionated results are endless. Now I don’t mean to bash on anyone here as there are many reputable sources out there who really put the work in to find a definitive answer. At HIPERFIRE we make it a point to not talk bad or call people out directly, but much of it is still opinions. Most people have the brands that they are loyal to (or ones that pay them), and it makes it difficult to be unbiased. Through my years in the military, private security, as an instructor, and in the firearms industry, I have heard just about every side of every argument and most of them can be traced back to a brand affiliation or specific background. It’s nuts. 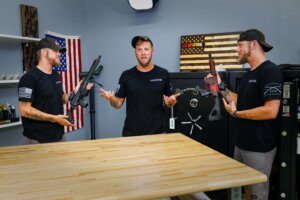 So what do we do when we simply want a straight forward answer or explanation? The answer to that question is much simpler than most believe. Go to the source. There may not be “THE” answer to everything, but gathering information from multiple sources can help YOU narrow down what is right for YOU. If you are here, you are likely interested on some level as to what HIPERFIRE has to offer, so I will give you an idea as to why we make the products we do.

Now I can’t tell you exactly why each and every person chooses each and every product they like, the combinations and differing preferences are endless. I cannot tell you why the inventors or engineers behind certain products did it the way they did. I am not infallible, I don’t know everything, and I am still susceptible to the “opinions are like a’holes” statement. What I can give you, however, is some insight into what the difference is between single-stage and two-stage triggers, what some of the different applications are, and the reason that we at HIPERFIRE decided to finally add two-stage to our line-up. So, here it is.

Simply put, single-stage should have one consistent pull weight for the entire length of pull from start to break, whereas two-stage triggers have two distinct stages through the pull (often referred to as 1st stage take-up and second stage “wall”).

A good two-stage trigger, again regardless of the amount of “1st stage take-up” or weight, should share the smooth, consistent pull in the 1st stage. At that point, just before the break, there is a distinct “wall”. What this means is that there is a certain point where the weight of the trigger increases enough to notice the feeling of hitting a wall. We would then simply pull through that wall. This should be an extremely short “click” past the second stage for the break.

Why do some choose one over the other?

Single-stage triggers can be faster than two-stage triggers on a millisecond level. Most refer to this as “split times”. The time it takes to get through the added weight of the second stage is greater than pulling through a consistent single stage. This is really only a factor for those who are really good at shooting as most average people cannot even come close to pulling the trigger fast enough for this to matter a lot.

Single-stage triggers are the most widely used in factory gun building due to the lower level of engineering efforts and cost in making them. Since the introduction of the M16 rifle to the US Military in 1964, the single-stage trigger has been the most widely used AR trigger. This means that many first time buyers, and many military members, are familiar with single-stage over two-stage triggers. This filters into all of the opinions out there because so many have become accustomed to them. Aside from aftermarket builds or smaller military contracts for Special Operations groups, this holds true today.

It’s really a 50/50 between single vs two-stage triggers when it comes to long range shooting. Many users who come from the bolt action realm prefer the single stage triggers due to the common belief that the trigger should surprise you. The more of the human element you take out of long range shooting the better. Therefor, many believe short creep, extremely light, single-stage triggers are the best. While this may hold true for some, there are many out there who only shoot long range with AR type “gas guns” and they prefer the control that they get from two-stage triggers. The ability to “prep” the first stage, and simply click through the second stage helps them to eliminate the human element as well, but in a different way.

Two-stage triggers are of their greatest benefit in high stress, high adrenaline situations where accidental discharges and hitting the wrong target is most destructive. When we are shooting at a range or a competition, having an extra round go down range or missing a target simply means disqualification or a knock in your points. For those just enjoying time at the range, it simply means some laughs and smack talking online when the video gets posted. However, to a military operator, S.W.A.T. team member, police officer, or someone protecting their family, missing their intended target or negligently squeezing off a round in the wrong direction can mean death to innocent bystanders and life in prison, let alone all of the guilt and grief that comes with it. Many people in the tactical and defensive realms have become familiar with two-stage triggers for their ability to “prep” the first stage. They press through the first stage to take up the slack, and from there they can add a bit more pressure to actually fire a round when they intend to. The second stage wall prevents some level of accidental discharge when adrenaline and stress levels are high, where many people forget their trigger discipline in lieu of the life or death situation in front of them. The second stage wall allows for a greater level of control in these very specific situations.

The choice is yours………

As with any other product, you need to first evaluate not only the intended purpose of the firearm you are throwing a trigger into, but the realistic likelihood you will use it in that situation. The trigger is a persons direct connection with a firearm, one of the most important parts in a firearm, and can make or break you in many different situations. A competitive shooter who is used to single-stage triggers can suffer stage losses due to split times and uncomfortable performance that they are not used to. Someone defending their family can have negligent discharge in their home and hit the wrong person if they have a light single-stage trigger in their defensive gun.

Here are some simple steps for finding the right trigger for you:

Take a realistic look at what you are buying or building the gun for. Competition guns are often finicky and require a bit of upkeep and tuning to keep them true, which is bad for defensive scenarios. Work guns can slow you down in competition and are not usually built for comfort and convenience, but rather practical application in a specific scenario. Ask yourself simply, what am I going to use this gun for, and what am I comfortable with?

Find friends or people at your local range who are willing to let you try out their firearms. The gun industry is way more friendly than most people realize and most people are more than happy to show off their built or bought boom stick with pride. This will allow you to try out new things without spending an arm and a leg buying up every different configuration and changing up your guns every few months. I guarantee you that if you see a HIPERFIRE Brand Athlete or Ambassador out there, they will be more than willing to show you a thing or two.

I hope this gives some insight into the difference between single-stage vs two-stage triggers. As I said at the beginning of this post, there are a lot of opinions out there. The best thing you can do is absorb the information, train, experience different products, and make your own decision. Don’t let someone push you into a decision that only matters for you. Heck, I don’t even care if you choose another trigger brand, as long as you are getting what is right for you.

As always, you can check out all of our products at www.hiperfire.com, and we are always here to answer questions if you want to give us a call or send an email!

Stay safe, have fun, and protect the second amendment! 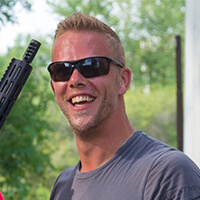 Ben is the VP of Business Development at HIPERFIRE. His main areas of focus are Marketing, PR, Business Development, and Customer service, with an additional role in research and development. He is a combat veteran of the US Army where he spent the majority of his time in a specialty Scouts and Snipers platoon within the 1st Infantry Division out of Fort Riley, KS. After being medically retired in 2012 due to injuries and illness while in Iraq 2010, he went on to become a passionate firearms enthusiast, instructor, competitive shooter, and entrepreneur. Ben brings experience in mechanics, metal fabrication, automotive and machine repair, ammunition and ballistics, security, military, firearms instruction, marketing, and business development to the HIPERFIRE team.