Hammer Strike Power, Who Gets It, Who Doesn’t

We began a series of white papers on HIPERFIRE’s trigger technology (see the earlier blog posts and read the white papers under HIPERTECH at the top of every hiperfire.com web page).  We stated that HIPERFIRE intended to design triggers with low pull weights.  Because that’s what we and the AR customer base wanted.  And we, and presumably, you didn’t want light strikes.

Light strikes are a fact of life with many trigger upgrades.  A light-strike is also known as a failure-to-fire or FTF.  You pull the trigger, the hammer drops, but the gun doesn’t go bang.  Why?  Well, to get that trigger pull weight pleasingly low, the hammer spring power or stiffness was reduced too much.  The trade-off: lower the trigger pull weight by lowering the hammer sear friction, and thereby lowering and sacrificing hammer strike power.  So, HIPERFIRE looked for a way to reduce the pull weight without sacrificing the hammer’s strike power.

HIPERFIRE tested its own triggers against that spec and many others.  The data collected for one category of triggers is shown below.  You can see that some trigger manufacturers fail to meet the SAAMI spec.  What we found interesting is that even those triggers that marginally met the spec also failed to go bang.  We know this from the feedback we get from our customer base that has switched from others’ triggers to ours.  We could conclude that the SAAMI spec minimum firing pin indent depth is too low.  In any case, you can see that HIPERFIRE’s triggers exceed the spec by a healthy, 100% ignition reliability margin!  We did it.  Low pull weight, MIL-grade hammer fall. 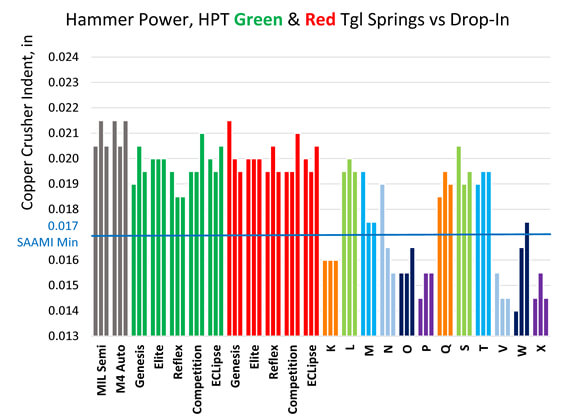 HIPERFIRE has a bias for excellency.  We want our firearm equipment to be safe, reliable, fast, and accurate.  What else is there?  Oh, we forgot.  FUN!  Give us a try.  Remember, the trigger finger can tell no lie.

Read all about it in HIPERTECH #5 posting soon.