HIPERTECH IS NOT AN ACADEMIC EXERCISE

HIPERFIRE recently introduced the PDI drop-in trigger family for the AR10 and AR15 rifle platforms.  It epitomizes the design goal that we have been writing about in HIPERTECH to this point.  We had the challenge to overcome what the majority of drop-ins sold suffer from: LPS or light primer strike.  We were not going to go down that path.

The majority of drop-in LPS issues involved the hammer spring in another way.  Even if these manufacturers could make a trigger with a lightweight pull and a hard-hitting hammer, very little space was available in the drop-in cassette frame.  The four-coil, double-torsion, hammer spring just wouldn’t fit.  So, you will observe that most drop-in hammer springs have three-coils per side, making it a weaker spring.

HIPERFIRE’s PDI drop-ins fix that.  We employ our Radical Sear Mechanics™ (HIPERTECH #2) in an even more radical way.  You’ll have to wait to read about that later.  Yes, our cassette frame leaves less room for a power hammer spring but, we did some things.  First, we carved out some space from the flanks of the hammer to make up some room sacrificed to the cassette walls.  Second, we use a three-coil hammer spring with a larger coil diameter.  Because we don’t have to contend with the limiting space of the AR’s lower receiver FCG pocket afforded for smaller coil diameter four-coil springs.  And, we made the spring wire diameter larger for more torsion power.  In fact, the torque this spring delivers is greater than MIL-spec’s.  Wow! 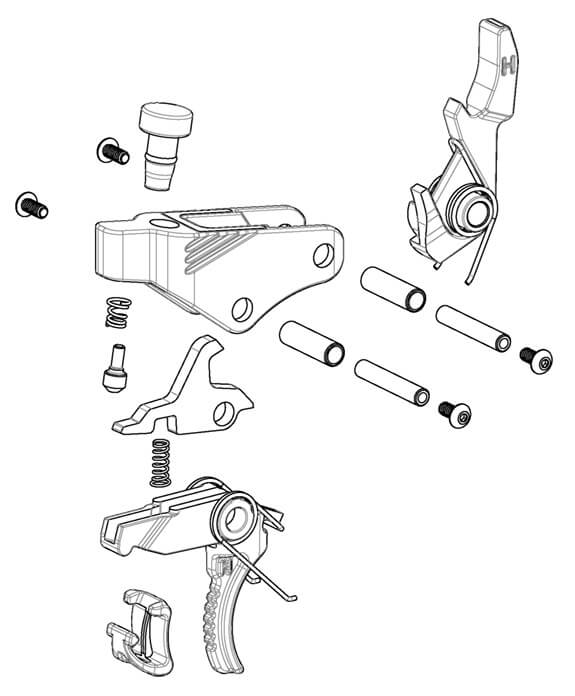 Consider that this was all accomplished for you, the shooter.  It was never HIPERFIRE’s intention to make a drop-in.  But, those of you who are users of our triggers demanded it.  The customer is always right.  Right?

Every other drop-in is a piece of beautiful, even delicate-looking clockwork, some factory or user calibration is required to bring the pull into spec.  Sometimes, recalibration is required over its life.  That precision was necessary to keep the weight and creep down, among other things.  That’s not the HIPERFIRE way.

At HIPERFIRE, we’re purists, it’s all about high performance in the worst of conditions for shooter and rifle.  It’s about accuracy and reliability.  Attractive appearances are secondary.  But you have to admit, we nailed the look with PDI.