So far, only two lowers we know of may not receive our FCGs, but with some qualifications. Both lowers are .308 lowers, which follow no commonly practiced MIL-spec standard like AR15 type lowers. We know of one that definitely will not, dare I say, should not, receive a HIPERTOUCH® FCG.

Smith & Wesson M&P-10: The first lower that may not permit our HIPERTOUCH® FCGs to operate as-is are lowers from Smith&Wesson that have ambidextrous controls. Users have reported to us that the ambi-controls invade the fire-control cavity and interfere with free rotation of the 24 series hammers where the toggle springs connect at the toggle spindle. The EDT series triggers install and function without issues. These users have removed the offending ambi-control and then the hammer is free to swing without interference.

DPMS 308-LR: Some 308-LR lower from DPMS will not work with our FCGs, or not work without modification to the lower. First, examine this document. It shows the FCG cavity that the HIPERTOUCH® FCGs are designed to work in. We have learned of three different problems that can be fixed by a slight mod to the lower and or the FCG, and one that can’t be fixed.

Colt Large Pin AR-15®: A customer installed a HIPERTOUCH® FCG in a rifle and complained about it bursting every time he pulled the trigger. After repeated tries to identify and fix the burst problem, HIPERFIRE® asked for a pic. Immediately the problem was identified. In the pic was an old Colt lower and yes it did have over-sized pivot holes. The customer wondered why it was so easy to install (the pins went into the lower with no resistance and now he knew why). The added pivot hole slop increased the functional pivot centers beyond MIL-spec and prevented the semi auto disconnector from ever capturing the hammer. The hammer would fall with every BCG cycle until the ammunition magazine was emptied or the shooter let off the trigger. HIPERFIRE® identifies its pivot pins as small and of 0.154-inch diameter. HIPERFIRE® does not make FCGs for the large-pin Colts.

Bushmaster Carbon-15 Composite Lower Receiver: The polymer lower’s trigger guard is not MIL-spec. It rides higher than the MIL-spec removable trigger guard. The HIPERTOUCH® 24C trigger must be shortened a little by grinding to remove the interference with the guard or the polymer guard must be trimmed slightly with a Dremel tool for example to allow free rotation of the trigger bow.

Seekins Precision SP Safety Selector Kit: This safety selector is not MIL-spec. It’s designed to operate at 90 and 60 degree throws by reversing the side on which is was installed. The cut outs in the cylindrical barrel of the safely for the trigger are therefore at vaious angles and interfere with operation of the Frame part on HIPERFIRE®’s HIPERTOUCH® 24 series triggers. Seekins Precision does not recommend HIPERTOUCH® 24 triggers for this reason and neither can HIPERFIRE.

Armalite 308 Bolt Carrier: A customer installed a HIPERTOUCH® 24C in a custom built AR featuring parts from different manufacturers. The customer chose a BC from Armalite. The bolt carrier would hang up on the cocked FCG hammer preventing it from going fully forward into battery and letting the hammer fall. It’s not clear to HIPERFIRE whether this was a fluke or a common problem to be encountered with Armalite BCs. The customer remedied the situation by selectively machining the hammer slot to make it longer so that it would leave plenty of clearance with the 24C hammer. See the pics below. 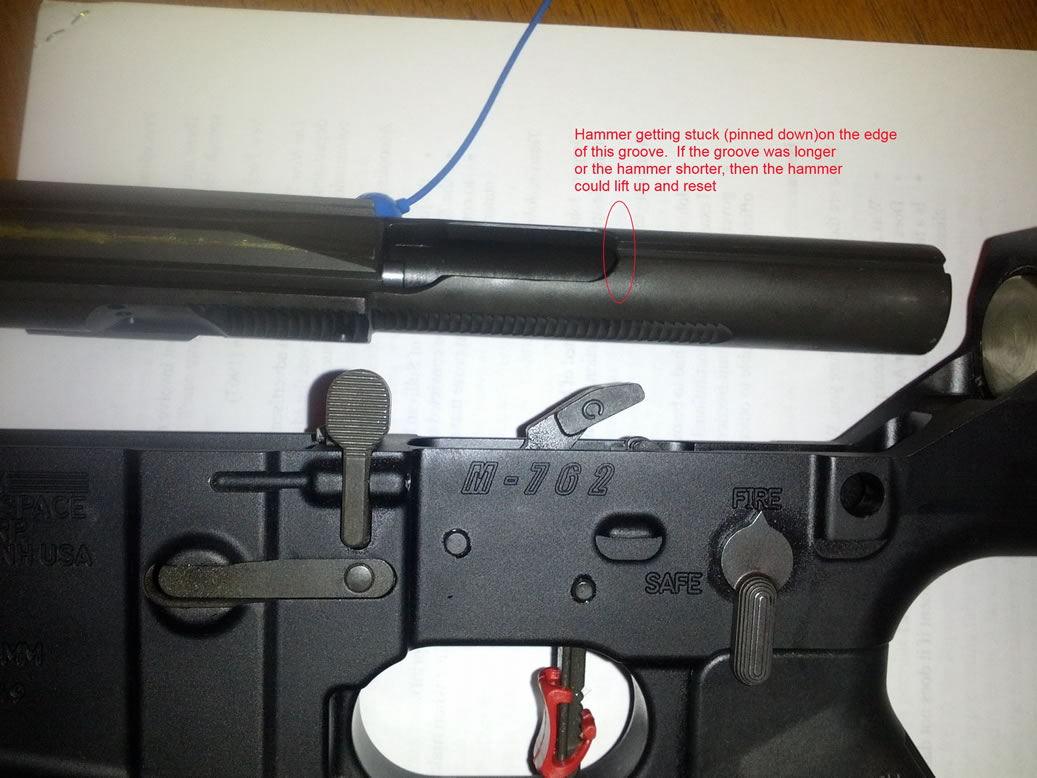 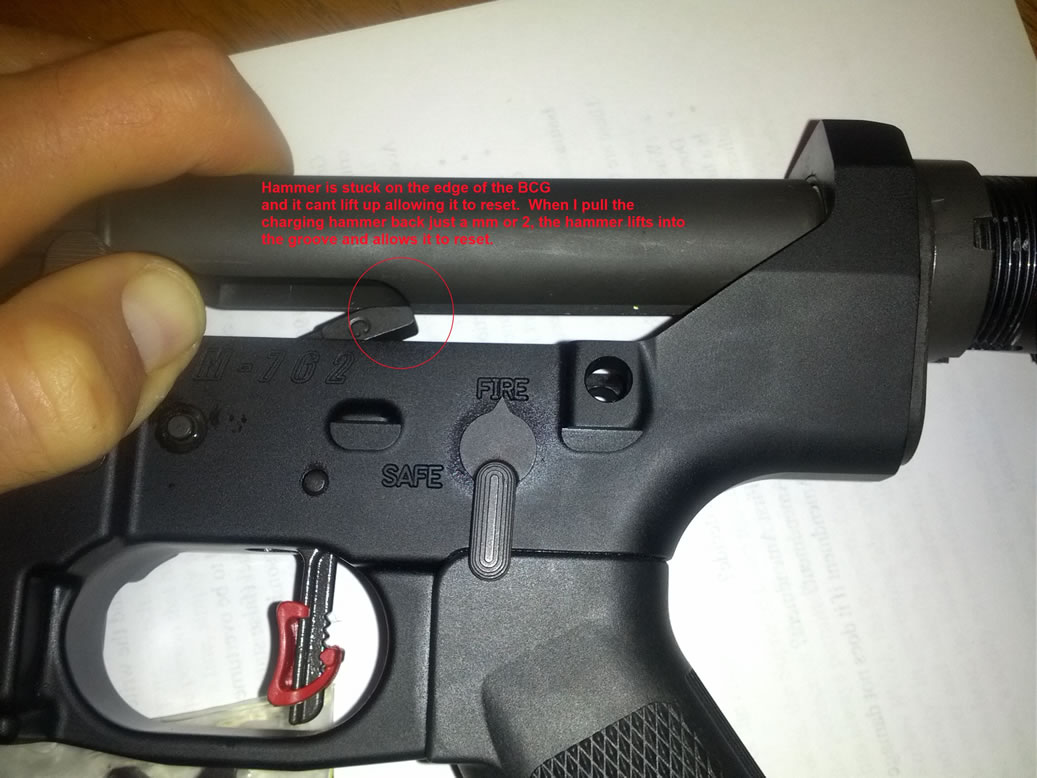 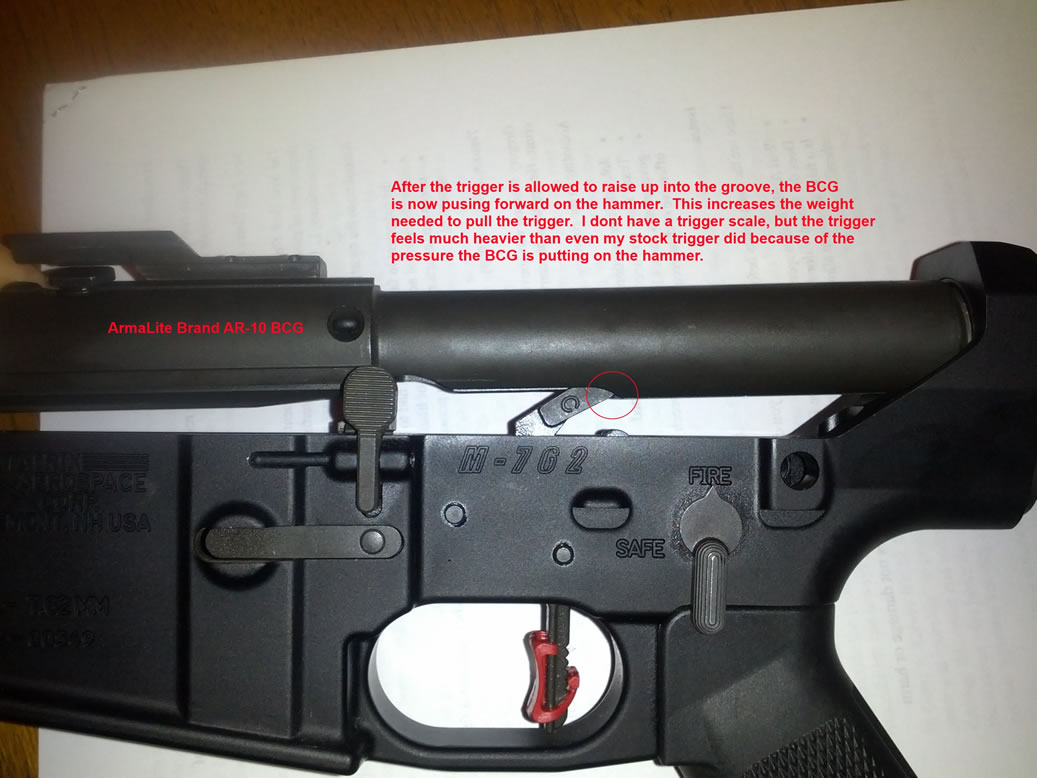 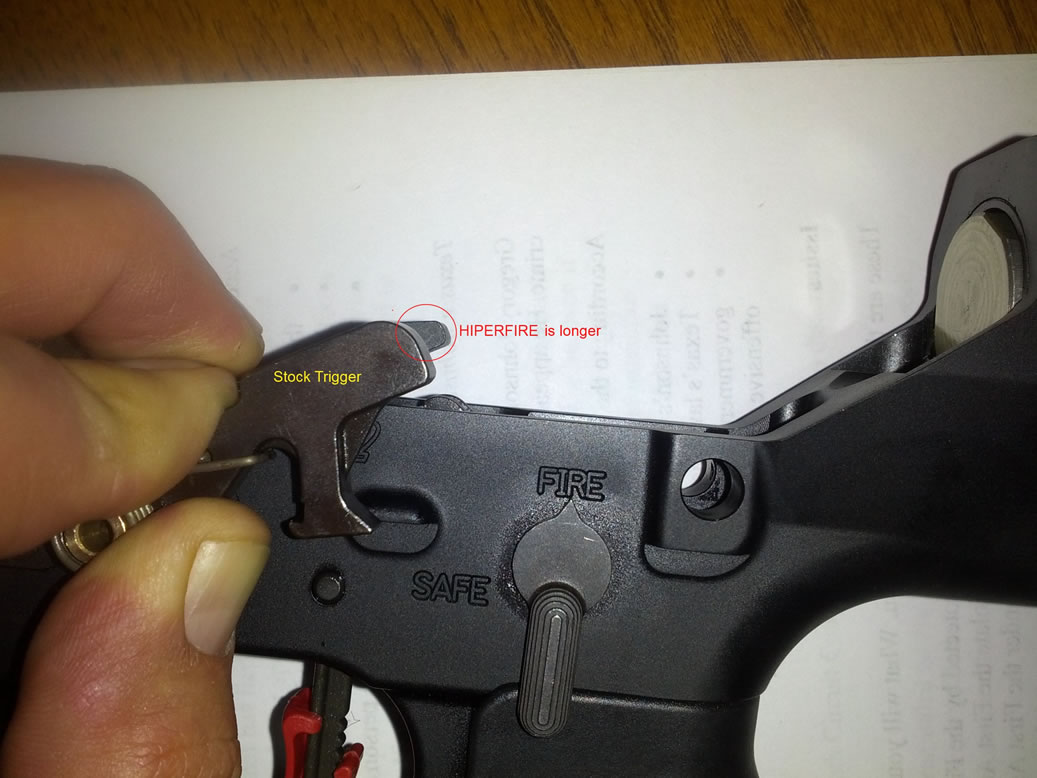 This article relates to the following products:

Terry Bender is HIPERFIRE®'s CEO and runs R&D.  He has over 35 years of experience in product and manufacturing process development, private consulting in forensics, failure analysis, and rem... Read More

Only show articles for the following products:

The trigger pin walks out. Can it be fixed?

What lubricants do you recommend for the HIPERTOUCH® 24 series triggers?

How does HIPERTOUCH® hammer fall energy compare to other products?

The trigger pin walks out. Can it be fixed?

What lubricants do you recommend for the HIPERTOUCH® 24 series triggers?

How does HIPERTOUCH® hammer fall energy compare to other products?

< 1 2 >
Only show articles for the following products:

Can you tell me how the triggers are similar and/or different? I’m having a hard time seeing it.

How do HIPERTOUCH® AR triggers compare to one another?