Creep is Good. Blasphemy, you say!

Recently, we posted HIPERTECH #3, where we provided a lot of pull weight data scans for over 35 AR15/10 triggers that also highlighted the trigger creep.  We defined creep in that article but withheld our judgment as to whether creep is good or bad.

“Creep,” any creep is a dirty word among shooters.  No one wants to talk about it.  But, it’s essential to have creep, any creep, for the safe function of a semiautomatic firearm.  No creep (less than a hair-trigger) is very dangerous at any weight.  The question should not be how much creep, but what should it feel like.  No one has tackled answering that question.

So, manufacturers focus on weight alone, giving a single number.  We show in HIPERTECH Bulletin #3 that every trigger manufacturer’s trigger weight is different.  The maximum is different.  High at first, high in the middle of the pull, or high at the very end.  Clean break, rolling break, and so on.  The average is also different among them.  So how is trigger pull weight an adequate descriptor of what the shooter feels when he pulls the trigger?

HIPERFIRE, the manufacturer has come up with a metric that combines both pull weight and creep into a single parameter.  In engineering terms, it’s called work or energy.  For shooters, let’s call it effort, the effort the shooter must exert to drop the hammer.  This metric is a number calculated from the same pull weight data scans shown in HIPERTECH #3.  The calculation takes into account the entire weight, no matter how it changes during the pull, but also includes the whole creep, no matter its character.  See the figure below taken from the Bulletin.  This shows how the work, energy, effort number is calculated.  The units of measure are inch-pounds (in/lb).  We know numbers like that from engine torque, fastener lockdown torque, etc.  Well, now we can relate those units to AR triggers. 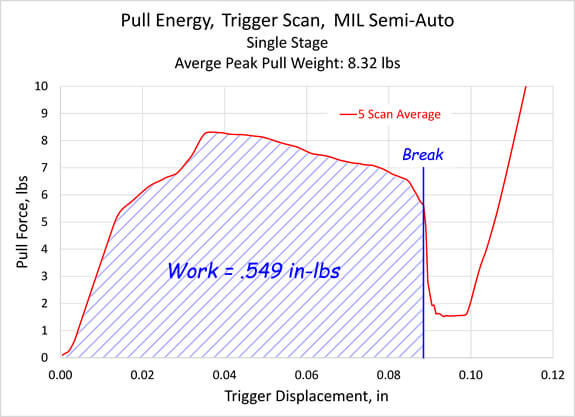 Figure showing the “area under the curve” or trigger pull energy/work.

You’ll have to read #4 is get all the details.  This new trigger parameter is very good at describing trigger control feel.   We can use it to rank how a trigger feels on the trigger finger as the shot is taken.

What Work, Energy, Effort Tells Us

So, how is creep good?

Ok, now you’re asking the right question.  We know lousy creep when we feel it, but who comments on “good” creep, except the case where the creep is “zero.”  We know zero creep is an impossibility.  Well, creep is good when it provides feedback telling us what’s happening when we pull the trigger.  This feedback tells us whether we like the trigger or not.

This has been HIPERFIRE’s take all along when designing good triggers, which is what our fans tell us, those fans who have tried a lot of different triggers and settled with us.  We created them based on their benefits to our shooting experience.

HIPERTECH #4 has a lot more info, and we rank over 35 triggers  based on pull energy and work.  It confirms what our fingers tells us in a parameter, more that weight or creep alone.  We’re getting closer to making a more complete assessment of what makes triggers good or not so good.  Stay tuned, we’re getting warmed up.